Qnet is a direct selling company that started back in 1998, which now sells a wide variety of products online. They claim their business model and products can help ordinary people like you and me enhance their lifestyles and become successful entrepreneurs.

Of course after doing a little bit of research, many people have been wondering is Qnet a scam, or are they a legitimate business opportunity?

While I personally would not flat out call this business a scam, since they are selling actual products — I will say that your chances of making a lot of money through them are going to be slim to none.

To better help you understand why I think this, let me explain a little bit more about this company.

What Does Qnet Sell?

Now from what I’ve gathered after reading several reviews of people using their products — they all were very disappointed and pretty much said they were overpriced pieces of junk.

While I can’t say for certain, but I believe this is one of the main reasons Qnet emphasizes in their promotional videos how much you can make by recruiting people into their program — rather then selling their products.

How Do You Make Money With Qnet?

Now the two main ways you can go about making money with them is by:

When you become an IR, you can earn a retail profit of up to 10% from all purchases off of your customers. The simple equation Qnet shows is this:

While this can make you a little bit of money, Qnet mainly emphasizes on you recruiting people like most other MLM companies do. Which brings me to the 2nd option.

Like I said the main way Qnet has been pitching their program to people for over 2 decades, is they say you can make a lot of money by recruiting people into their program so that they can do the same thing.

While this sounds good on the surface, the brutal truth is people that join late into a program usually end up making barely anything — since most their money is siphoned to the people above them. Hence where the Pyramid scheme gets its name.

And since this company has been around since 1998, you can probably assume that there are thousands upon thousands of people above you — which to me if I was into multilevel marketing would be a big turn off.

However if you are still interested in joining this company, let me go on and tell you what their compensation plan is like.

Like with most other MLM products I’ve reviewed, instead of Qnet focusing on selling their products — they instead over hype and talk about how much money you can make by simply recruiting people and building a big down line.

To quote them, they say you can build a sustainable business and lasting power by simply doing 4 things…

While there is a 16 page PDF you can view here, you’ll basically be doing 2 things to make money when you refer people.

First you’ll build two teams beneath you, recruiting as many people as you can. Once these people join your team, you simply will teach them how to do the same thing which is to recruit other people.

The reason behind this is that you’ll get a percentage of what everyone makes below you — which in theory could make you a lot of money. Again though this is very hard, and only works for people at the top of a program.

Next you’ll be trying to climb in ranks to earn bonuses and higher payouts.

To do this you’ll simply keep building up your down line, by recruiting more people to join underneath you.

As you can clearly see it gets quite hard to get higher rankings because you have to continue to sell more products, recruit more people, teach these people how to do the same thing, then pray that no ones leaves your team.

All in all I think it’s a very poor way to try and build a business as you are ultimately putting your income in the hands of people who may not have drive or skills on how to sell items and recruit people.

What’s The Cost Of Joining Qnet?

One of the very few things I can say I like about this program, is that it only cost $30.00 a year to join their program.

While this is very cheap compared to most other programs online, I still wouldn’t recommend joining this program what so ever. In fact, I found tons of complaints about Qnet, after researching this company for about 5 minutes.

Like I said, after I spent maybe 5 minutes researching into this company — I got bombarded with complaints one after another of people saying how much they hated Qnet.

People were calling Qnet Frauds, Scammers, Cheaters, and just about everything and anything they could think of. This is probably due to fact this company is selling a pipe dream of financial freedom and an easy life — when in fact as I’ve mentioned several times already MLM companies are very hard to succeed in, and in general 99% of people usually fail in.

Here’s a few screenshots I took just to help prove my point: 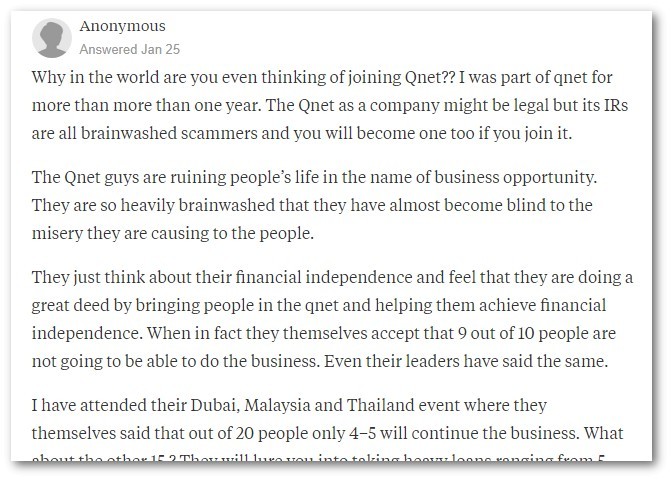 So again I would be very cautious joining a company that has nothing but one complaint after another on them. Instead I would find a reputable company that people enjoy being part of, and helps teach people an honest way to make money online.

Who Is Qnet For?

Personally I don’t see this company benefiting anyone in any kind of way.

They lead you to believe you can make a lot of money very easily (a lie), many people have said their products are total junk, and I can’t go anywhere without seeing one complaint after another on how much people hate this company.

My Final Rating – Is Qnet A Scam?

While I wouldn’t call Qnet a scam since they do sell actual products, I highly disagree with their sales tactics promising that you’ll become rich if you join their program.

As with most MLM companies, making any kind of decent money is extremely hard since you have to try to recruit people into a program where the top get all the wealth — and your left with mere pennies.

Also lets not forget all the negative comments that are on the internet about this company — which I believe would make it that much harder to convince people to join this shady company.

So my suggestion is to forget Qnet, and look for a better alternative to make money online.

Here is a program that taught me (and millions of other people) step by step on how to start making money online — and best of all there is no recruiting what so ever.

Your success will be determined on how hard you work, if you can follow instruction and learn some new skills, and most of all have patience as you build out your business from the ground up.

If you would like to learn more about this program I’m a part of called Wealthy Affiliate, you can check it out here: 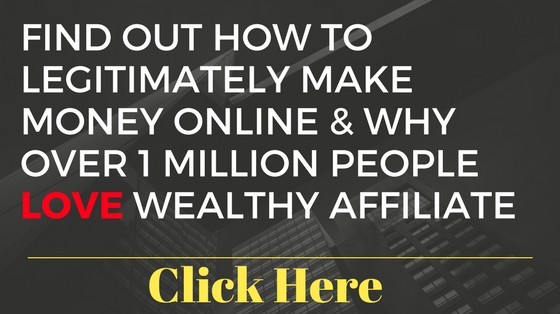 So do you have any questions, concerns, or personal stories you would like to share with me about Qnet? If so leave a comment below, and I’ll be happy to help you out. 🙂

15 thoughts on “Is Qnet A Scam? Here’s My Unbiased Review About This Company”